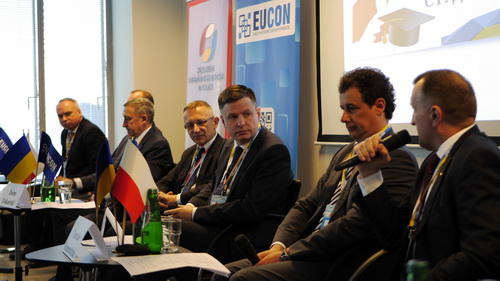 The VIII International Forum “Days of Ukrainian Business in Poland”, which traditionally collects representatives of state authorities and business of Ukraine and Poland on the same platform in order to exchange experience and find common interests for cooperation was held in Warsaw on May 10, 2018.

Particularly, within the framework of this year’s forum in Warsaw, the participants discussed the prospects of Polish-Ukrainian cooperation in the economic sphere and the prospects for implementation of joint transport and infrastructure projects, touched upon the issue of attracting foreign investments to Ukraine, presented the economic potential of the Odessa and Donetsk regions.

The Ukrainian delegation was represented at the forum by the Andrii Deshchytsiia,  Ambassador Extraordinary and Plenipotentiary of Ukraine to the Republic of Poland;  Taras Tokarskyi, Deputy Minister of Regional Development and Construction of Ukraine; Slavomir Novak, Head of the State Agency of Motor Roads of Ukrain; Volodymyr Stavniuk, Chairman of the Board of the State Finance Institution for Innovations; Yurii Dimchoglo, performing duties of Chairman of the Odessa Regional Council; Ruslan Kulyk, Advisor on international cooperation of Donetsk Regional Development Agency.

Yaroslav Romanchuk, the Chairman of the organizing committee of the forum, Managing Partner of EUCON International Legal Center, President of the Association of Ukrainian Businesses in Poland, by opening the event, congratulated the participants of the Event and said that this is the eighth Event, and it should please the fact that this Event has significant interest in business both in Ukraine and in Poland.

He noted that during the preparation for the forum, the organizers tried not only to cover the most relevant issues of Polish-Ukrainian cooperation, but also to involve the ministries and state authorities from both countries to participate in the Event, in order to hear at first hand the current status and prospects of economic relations development between Ukraine and Poland. 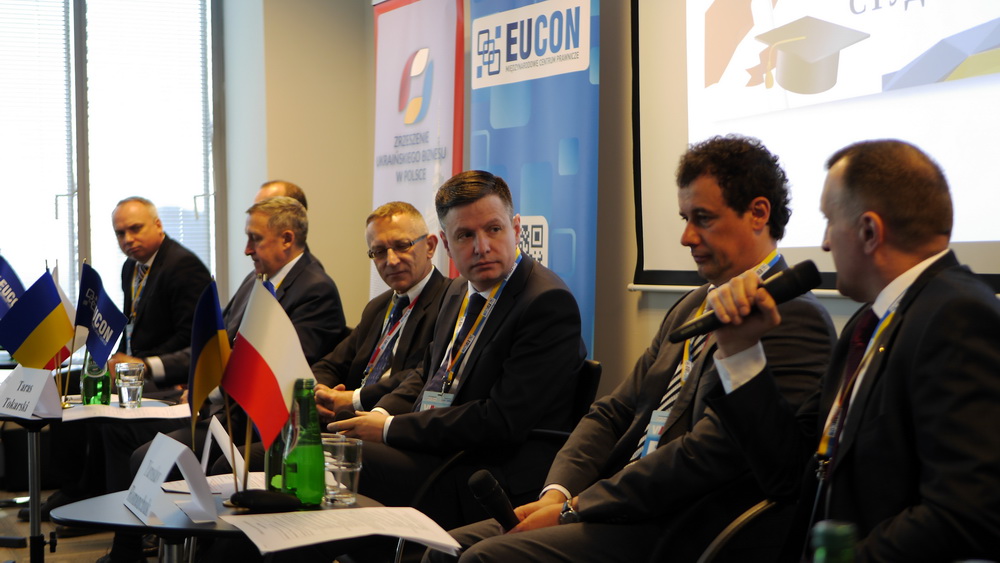 In the framework of the first panel discussion “Prospects and Challenges for Polish-Ukrainian Cooperation through a Prism of Economic Interest”, Yaroslav Romanchuk and Irenesh Derek, Chairman of the Ukrainian Business Association Council in Poland, talked about the dynamics of Polish-Ukrainian cooperation, presenting the status of foreign trade of Ukraine in 2017 and about the trade partnership between Ukraine and Poland (indicating the services and commodity groups the export and import of which were carried out most). 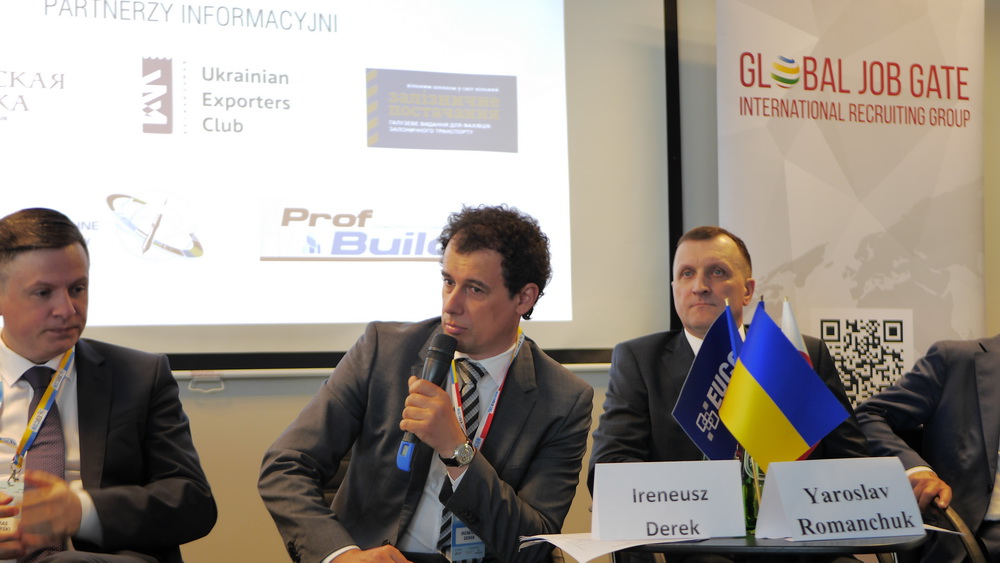 Andryii Deshchytsia, Extraordinary and Plenipotentiary Ambassador of Ukraine to the Republic of Poland, in his statement, emphasized the importance of such activities for business as they promote the establishment of links between entrepreneurs from Poland and Ukraine. He also noted that, not significant growth of goods turnover between Ukraine and Poland is being observed.

Krzysztof Siewek, the Minister’s Advisor of the Ministry of Investment and Development, drew attention to the fact that the Ministry of Investments and Development of Poland has always supported and supports cooperation between Ukraine and Poland, and recently, much attention has been paid to assistance to small and medium-sized businesses, this also applies to Ukrainian business, which goes to the markets of Poland. In addition, the Ministry also pays great attention and supports cooperation between countries at the regional level. 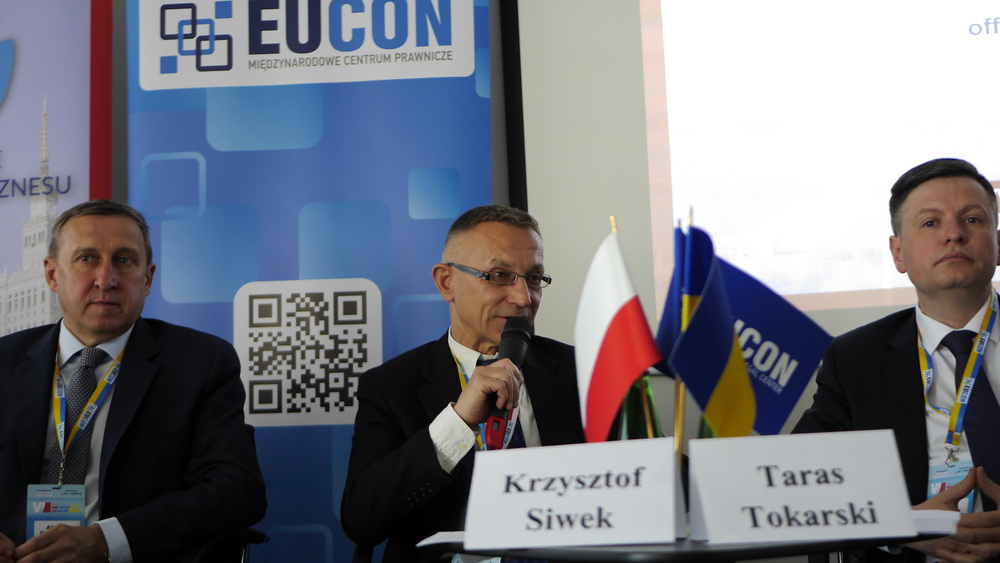 Taras Tokarskyi, Deputy Minister of Regional Development, Construction and Housing and Communal Services of Ukraine, who is responsible for the decentralization reform, said that today in Ukraine special attention is paid to rural areas where social objects are created; medical centers are aimed at keeping the population from external and internal migration and use of the potential of such regions. He also noted that in comparison to other European countries in Ukraine, there is relatively low unemployment (8%) and the last year’s GDP consisted of 4.6%, and is projected to reach 4.5% this year, which in turn should attract foreign investment in the country. 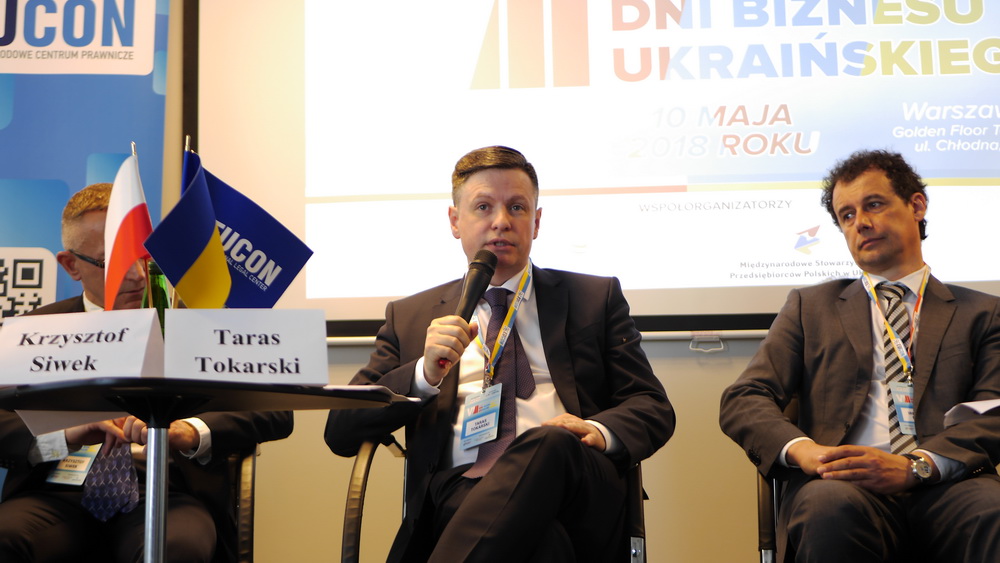 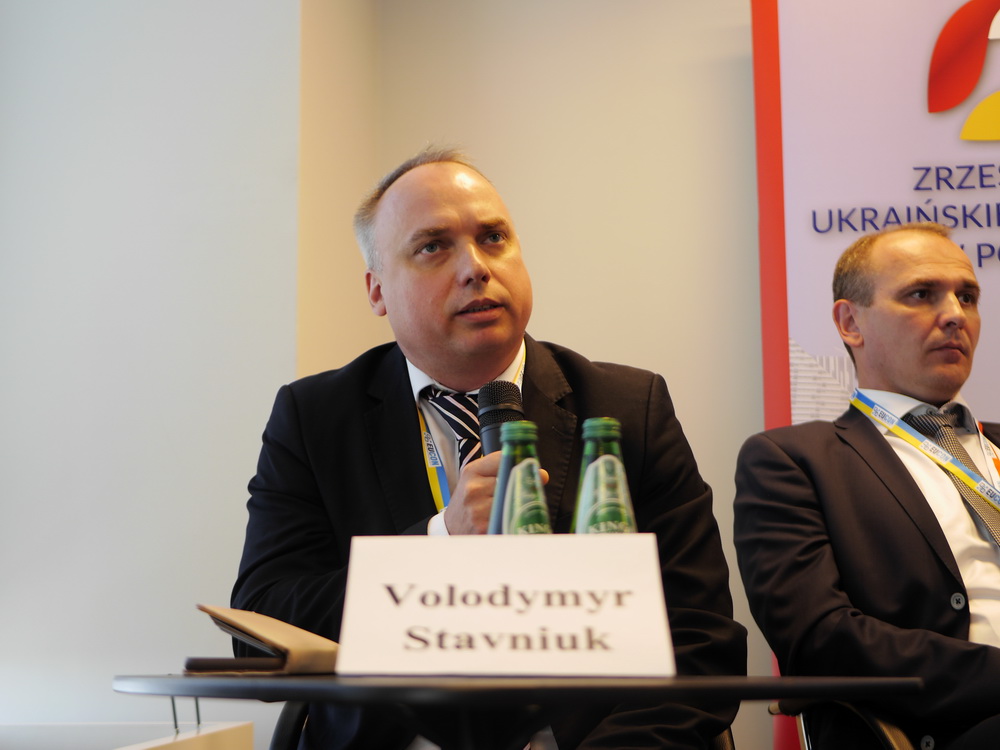 Among the speakers of the first panel discussion there were Lech Pilavsky, General Director of Confederation LEWIATAN, who pointed out that the context of the global economy, including the European one, is changing, which in turn leads to new challenges for business and politics that can only be overcome through a common partnership between Ukraine and Poland. 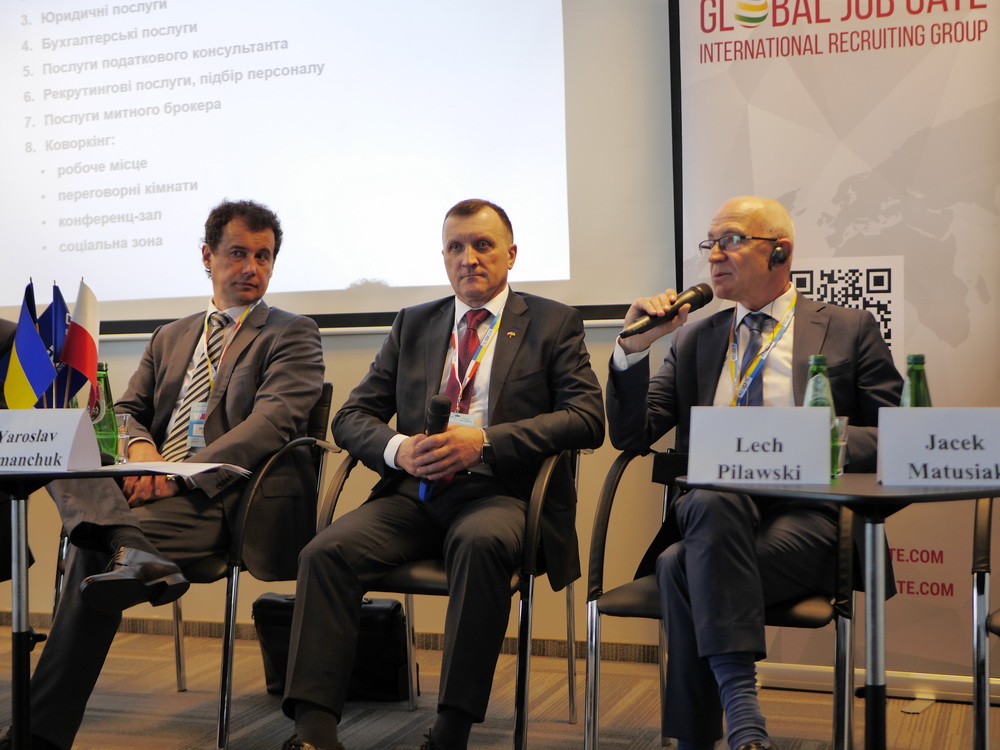 Vadim Sen, Deputy Chairman of the Board of the Association of Ukrainian Business in Poland, Chairman of the Board of the SenV Group, shared his personal experience of entering the Polish market. Vadim Sen said that if you plan to enter the Polish market, you have to be prepared to compete with local companies that have more funding and greater access to financial resources.

The second panel discussion was devoted to the issue of transnational transport corridors and joint infrastructure projects.

Slavomir Novak, Head of the State Road Administration of Ukraine, presented the GO Highway project, which is important not only for the National Transport Strategy, but also for economic, social and cultural relations between Ukraine and the EU. According to Mr. Novak, this year in Ukraine an important step was taken to further development of the road infrastructure, the Parliament approved changes to the legislation on concessions of roads, which created favorable conditions for investors who are able to build roads in Ukraine. As Slavomir Novak noted, an important step in the cooperation between Ukraine and Poland was the signing of contracts within the framework of the implementation of the Agreement between the Government of Ukraine and the Government of the Republic of Poland on the provision of loans under the terms of related assistance. 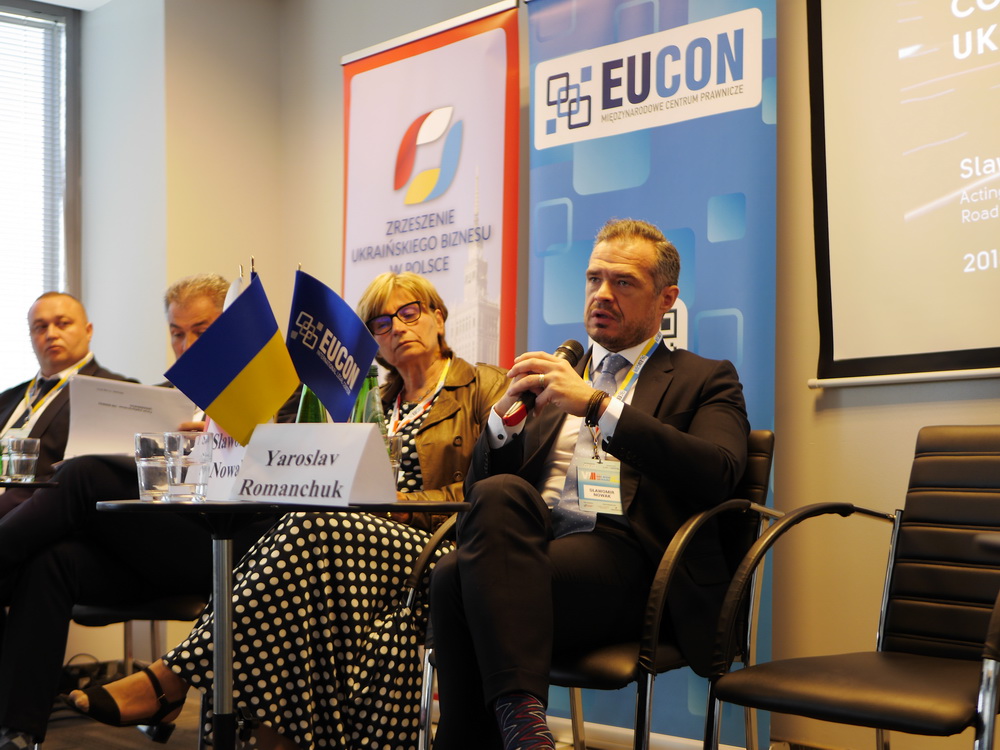 Iwona Stempien-Kotłarek, Deputy Director of State Roads and Highways of the Republic of Poland in her statement said that Poland is currently implementing road construction projects to be completed by 2023, and plans to start construction of roads leading to the borders with Ukraine at the end of this year.

Anatolii Yablunivskyi, Head of the Administration of the Kherson Sea Port, told about the potential of the sea ports of Ukraine. Particularly, Mr. Anatolii presented the E-40 waterway, a project to rehabilitate the E-40 waterway at the Dnipro-Vistla section connecting the Baltic Sea and the Black Sea, emphasizing that the project is being implemented in the framework of the cooperation Poland-Belarus-Ukraine. 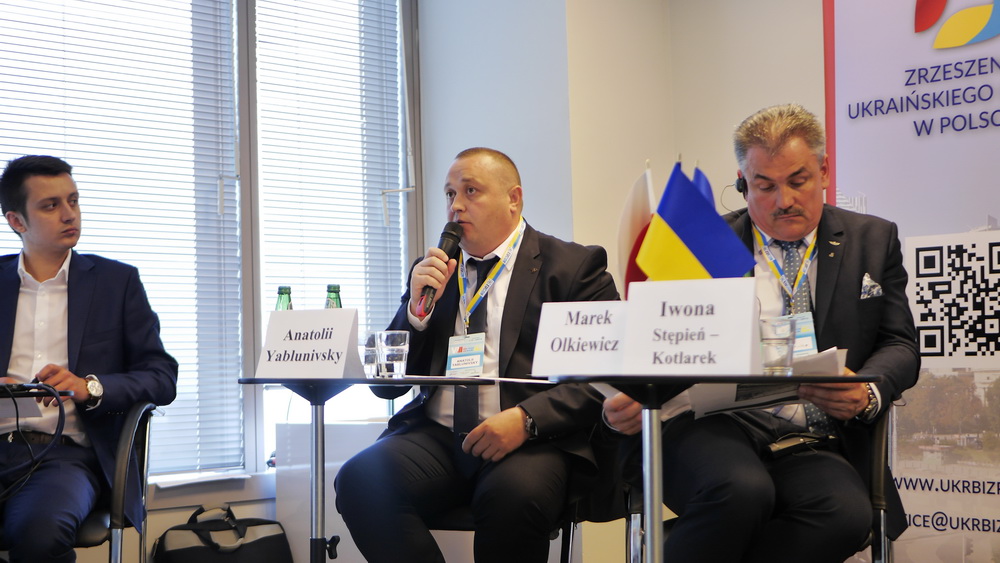 Marek Olkevich, Deputy Chairman of the Board of PKP Polskich Linii Kolejowych SA, said that close cooperation and development of the railway infrastructure is underway, namely, PKP PLK S.A. is investing in rail border crossings between countries and in border rail lines; the freight corridor will be extended from Javozhno-Shchakov to Medik in 2020.

Karol Kubica, the Head of the Foreign Trade Representation in Kiev, of the Polish Agency for Investment and Trade (PAIH), told how at the expense of foreign representatives around the world, including in Kiev, PAIH supports foreign expansion. 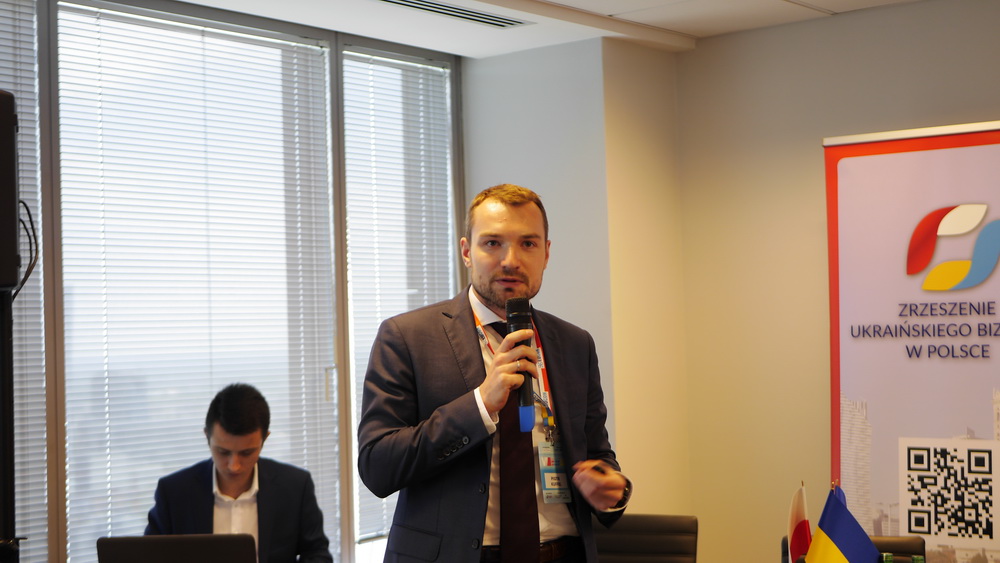 Yurii Dimchoglo, performing duties of the Chairman of the Odessa Regional Council, spoke about the economic and investment potential of the Odessa region, pointing out the developed transport-logistic structure of the region, industrial potential, a powerful agricultural sector and the active implementation of renewable energy. 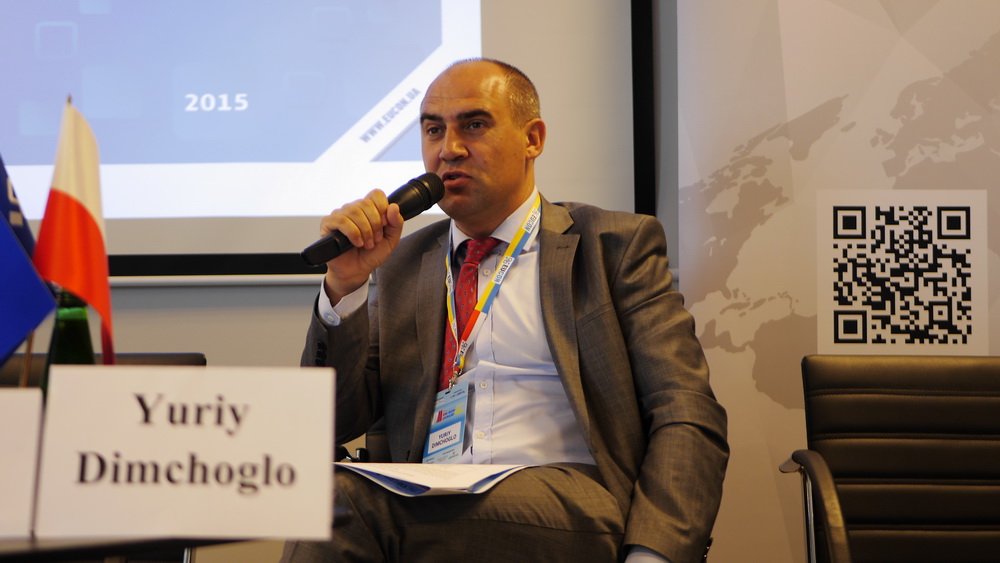 As part of the forum, the participants also discussed the issues of migration processes and “personnel shortage” in Poland, as well as the impact of these processes on employers, described in detail by Anette Guzek-Rochyck, Managing Director, International Recruiting Group Global Job Gate, Warsaw. 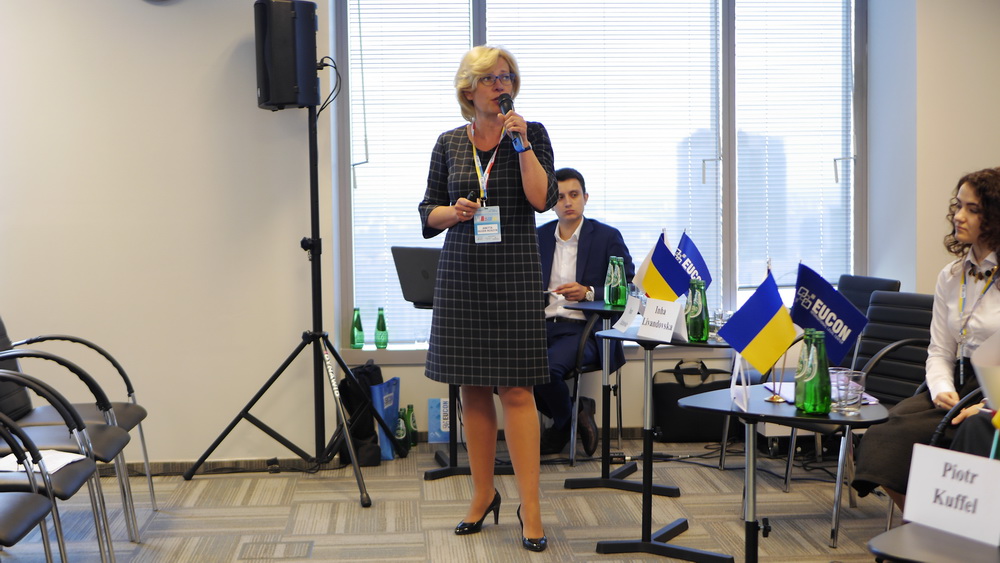 Forum speakers also raised the investment attractiveness issues of Ukraine, told about the speed and accessibility of business registration and the features of the tax system in Ukraine. They also discussed options for future cooperation on the production of building materials, etc.

The Event was organized by the EUCON International Legal Center, the Ukrainian Business Association in Poland, the Polish Confederation of Employers, Lewiatan.

International Society of Polish Entrepreneurs in Ukraine; International Recruitment Group Global Job Gate are the co-organizers of the forum.

PHOTO REPORT FROM THE FORUM